As 2018 wraps up and comes to an end, Transgender Leadership Alaska is looking towards the future and to continuing to lead the way in trans education and advocacy in the state of Alaska. In order to do that, we need to make sure that we are empowering our trans leadership, standing up to injustice, and increasing awareness in all of our communities.

Today we announced the upcoming Trans Alaska Summit to be held March 8th through March 10th, 2019. We are hoping that the event will bring together trans individuals from all over Alaska to teach and learn from one another in a weekend of workshops and fun! Because we are hoping to educate and raise awareness, this event will be open to the entire queer community and allies; we encourage everyone to attend!

The schedule is tentative right now, however if you or your group would like to give a lecture or lead a workshop, we encourage you to apply. Click here to open the application form for TAS 2019. If you have any questions regarding the event or the application process, feel free to email us at transleadershipalaska@gmail.com

Transgender Day of Remembrance (TDOR) recently passed us as yet again we celebrated and honored the lives of the transgender and gender nonconforming (TGNC) individuals who were murdered this year. The numbers reached at least 369 recorded deaths from November 20th, 2017 through November 19th, 2018. Due to the stigma around this community and the difficulty in seeking out reports, it’s plausible to assume the numbers reach much higher. You can find this years list supplied by the Remembering Our Dead Project here.

In remembrance our fallen TGNC siblings, we hosted a few events leading up to November 20th. A social hosted at Alaska’s center for the LGBTQ+ Community, Identity Inc. brought the community together under one roof and was followed by Transcending Tales: Overcoming Adversity. Transcending Tales brought together six trans and gender nonconforming speakers to talk not necessarily just about their transition or life in the trans community, but their experience in the world. The show put on at the Alaska Experience theater was directed by Oliver Smith and featured Quinn Christopherson as the musical opener followed by the stories of Emma Horner, Kal L. Bacon, Luka Kondratyeva, Skylar Arend, Matt Pacillo, and EB Galloway. You can see this edition’s recording below.

Following Transcending Tales, Transgender Day of Remembrance was observed in Anchorage, Talkeetna, Fairbanks, Juneau and Wrangell. The Veteran and Pagan communities of Anchorage held additional observances of TDOR, making this year’s observance possibly one of the furthest reaching in Alaska so far. Though we are saddened that year after year more names are added to an ever growing list in greater and greater proportions, we hope to remain vigilant in connecting and strengthening our communities. We thank Alaska for joining us again this year.

It’s Trans Week of Awareness and that means that Trans Day of Remembrance, a day honoring and celebrating the transgender and gender nonconforming community in wake of the violence they face every year. Across the state of Alaska in Anchorage, Fairbanks, Talkeetna, Juneau, and Wrangell TLA and allied organizations will be hosting events in remembrance of those we lost. You can find the different events we’ll be hosting on our events page  or on the flyer below. 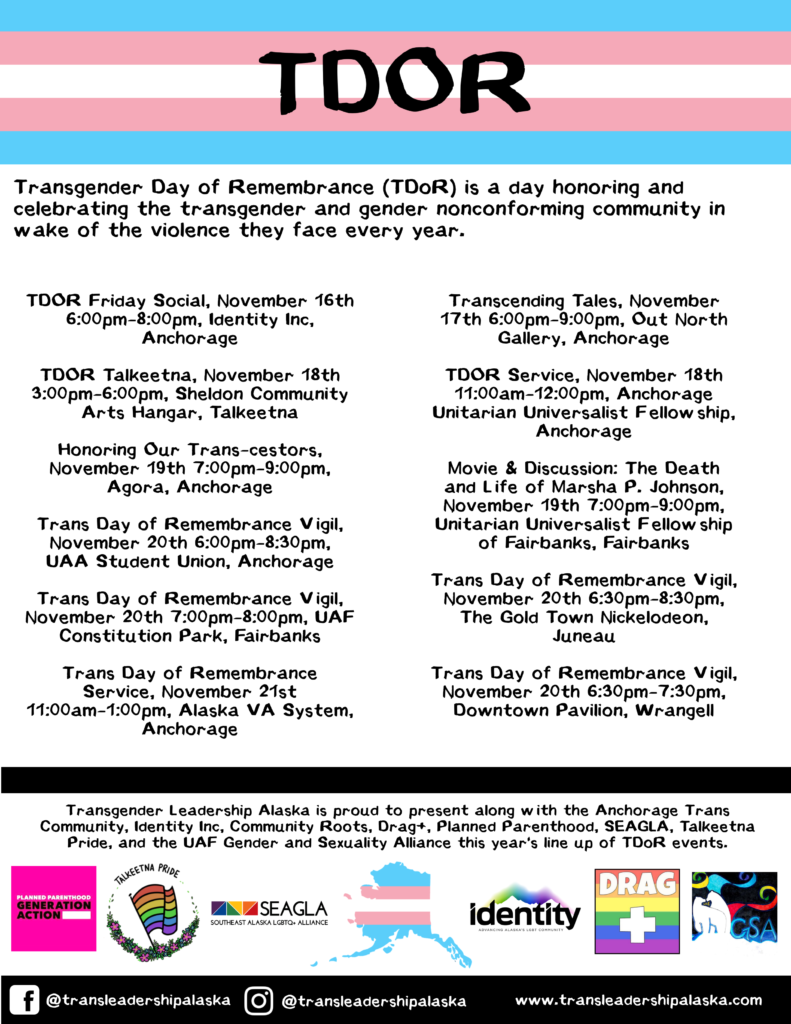 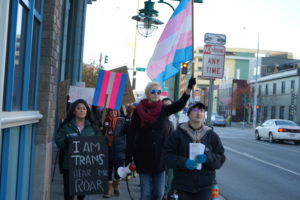 In a short-notice call to action this weekend, Trans Leadership Alaska held a rally in support of trans rights, bringing awareness to the upcoming election and to problems with our current administration. Although the rally was intentionally nonpartisan, the organization called to attention the recently leaked Trump Administration memo that revealed the Department of Health and Human Service’s plans to attack the transgender and gender nonconforming community. The memo states that under their proposal, gender may be defined in binary male-female terms and based solely on one’s genitalia at birth. This plan definitively erases transgender and gender nonconforming people under the law.

There was noticeable tension in the air when addressing the systematic attacks on the TGNC community, however as multiple members from TLA addressed, simply being visible and showing support for the community moves us closer to a safer more inclusive world. Trans education pamphlets and statewide equality petitions were brought in tow to promote and expand the work that TLA is hoping to continue over the coming years. 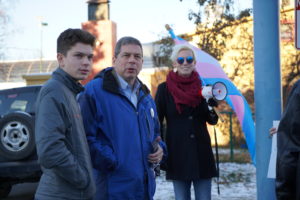 In addition to the 70+ people that attended the rally, governor candidate Mark Begich made a surprise appearance coming off the busy campaign trail just days before the election. Begich has a history of standing with the LGBTQ+ community as an elected Alaskan official, whereas Begich’s competition Mike Dunleavy is outspokenly anti-LGBTQ+. Looking forward, the governors race will influence much of TLA’s work in the future. We hope that you all vote this upcoming Tuesday!